Finally! I’m catching up on the Outback story, only about 8 months late. Thank you to my dear friend Shirlee who took me to all the interesting places, and knows so much about the Outback that the trip was so much more than I expected and I learned heaps.

When I told people that I was going ‘Outback’  to Cameron Corner for a week I was stunned by the number of people who said things like ‘Why? There’s nothing out there?’ Even the girlfriend who lives out there and was to be my ‘tour guide’ (and loves the Outback) was concerned that I would get bored! How could I possibly be bored with Shirlee as my guide? I wondered.

Given all those comments I took the precaution of taking my iPod and dock for musical entertainment in case it was needed. Needless to say I only had it on once for a short time.

The Australian Outback, certainly the part I went to, is incredible. Of course it is quite possible to go out there and miss everything. You have to go and keep your eyes and ears open for subtle changes of environment, for hidden fauna suddenly appearing from their camouflaged hiding places and the unexpected flora to be hiding among the spinifex or bull dust. (For those who don’t know what bull dust is, it’s the red thick dust that covers everything!)

If you would like to look my trip up on a map here is the list of places starting from my home town of Canberra. Canberra – Sydney train to Wellington – coach to Dubbo – coach to Bourke – 4 wheel drive to Wanaaring, Fords Bridge (4 houses and a pub), Wanaaring again, White Cliffs, Pack Saddle, Milparinka, Tibooburra, Cameron Corner, Tibooburra again, back to Wanaaring, Muella Station, Fords Bridge, Bourke and the return trip home to Canberra through Sydney, stopping for a night at the Central Station YHA.

If you ever go to Bourke and stay at the Port O’ Bourke Hotel, just ask them about the crazy woman who turned up at night and fell face first into the pub! And that was without any drinks! Yes, they’ll never forget me at the Port O’ Bourke! I just thank my lucky stars that no-one had a camera.

The thing about the Outback is that you just don’t know what to expect. Mostly it depends on the weather. Things change depending on the amount of rain, sun, length of dry periods and so on. The wildlife also depends on the weather. Where I stayed for a couple of nights (just up from the Warrego river) had resident frogs in the shower and in summer there is a resident brown snake. Luckily it was ‘winter’ so the snake was nowhere to be seen, so the frogs lived happily in the shower. 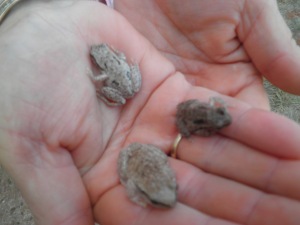 And so on to the road trip. First major stop was White Cliffs, about 580kms from Fords Bridge. Now that is an interesting place, an opal mining town, so it looks like giant moles live there and have dug the place up. Some buildings are on top of the ground but many are underground, dug into the rock that hides the opal. It’s hot in the Outback, in Summer it can get to 50 degrees centigrade so even the red wine is refrigerated. We stayed in the Underground Motel, a must experience, as Shirlee said it was like waking up in a giant pavlova.

In White Cliffs as in all mining towns you can of course do a tour of a mine, it was fascinating, I even had a go at a hydraulic digger, rather fun. It’s a typical Aussie Outback town, with it’s range of interesting characters, a pub, friendliness and the obligatory town dog wandering the wide roads. As well as a massive amount of history from the early settlers and meeting lots of travellers (mainly from Victoria) heading to the Birdsville races. 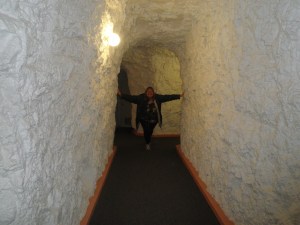 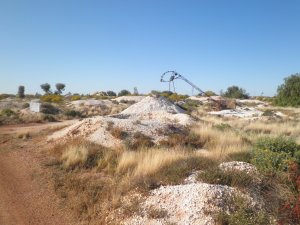 On the road again to Pack Saddle, pretty much just a pub in the middle of nowhere, no better place to stop for lunch and a few beers.  Good food, cold beer and like everywhere you run into people you know and others you don’t, but you always have some great conversations.

Onwards to Tibooburra with a quick stop in Milparinka. There are no residents there any more and the pub is closed but the town is kept running as a tourist spot by volunteers from all over Australia and the world. There we saw the original gaol, school, police station etc Life was tough in those parts and although technology and the wheel have improved things, it’s

Tibooburra next stop, fascinating area. Up until that point there was a mixture of bull dust and low growing greenery, suddenly, as you close in on Tibooburra you find yourself in something that can only be described as a rock farm. There are rocks everywhere of all sizes, making the area look something like a moonscape. 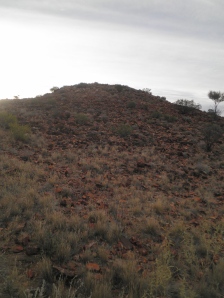 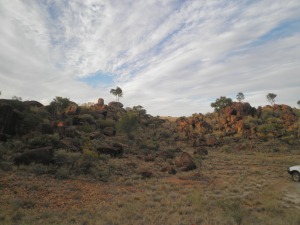 Rocks, rocks and more rocks. It was also the place I finally saw real Sturt’s Desert Pea in flower.

And then came Cameron Corner. A bumpy ride through a national park (mainly of course bull dust and low growing greenery with wildlife in places) as a passenger in the Outback you have a job and a title – so I got to be the ‘gate bitch’, yes that means I got out to open and close all the gates along the way. There’s not much at Cameron Corner but it is important, the dingo fence runs through there and there is an awesome pub (if you go there, take a spare cap, apparently visitors leave a cap in the pub, so there are whole walls of caps from all over the world), other than that there is the official mark where 3 States meet (and a toilet block).

And so back to Fords Bridge, I saw so much along the way that if I mention it all this will turn into a book so suffice it to say that I got a very good idea of what our famous poets Henry Lawson and Banjo Patterson wrote about and why they were so passionate about the area (both positively and negatively). All that is left is to give you some photos of wild life and to mention that something one must do outback is stop by the side of a good piece of flat dirt road, pick a lot of paddy melons and have a game of paddy melon bowls, awesome fun! 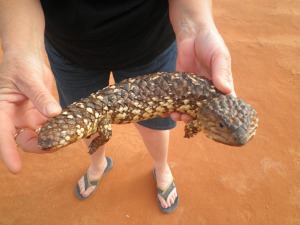 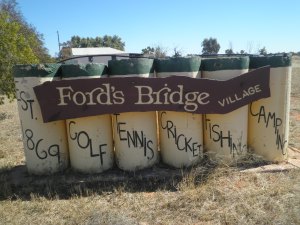 So come visit the Outback, and keep your eyes open as you drive around, the wildlife has a tendency to jump out in front of you when you least expect it.

One thought on “The Australian Outback”